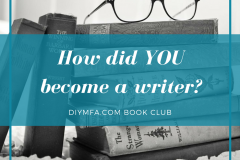 It’s a great question. Was I born this way? With odd ideas, demanding characters, and a dramatic flair…? Probably.

I love to read. Always have. Always will. I don’t remember being that pain in the ass kid who never wanted to sleep, but I know I was. My mom mentioned it once. She never could only read a single story before bed. Nope, I would tug on her sleeve and ask for more until finally, exasperated she’d get up and turn off the light. I guarantee I could have stayed awake all night listening to her read. Because that’s just me.

According to mom, my first day in first grade was a massive disappointment. She took the day off and waited for me by the front door, excited to hear all about it. So when the school bus dropped me off, rather than face a happy, excited, 5-year old, she was treated to a sad, moody first grader.

“What’s wrong,” she asked, shocked by my demeanor and immediately worried that something terrible had occurred. Unbeknownst to her, in my world, something awful HAD occurred.

“I didn’t learn to read today,” I said, sad and serious. Because after-all, this indeed was a serious, serious matter.

My mother, too shocked for words, only stared and gave me a hug,

When I finally did learn to read, books were a constant companion. I’d hide in my closet after mom kissed me goodnight, flashlight in hand, until my eyes grew weary (or my older sister came to bed). I was the epitome of cool. I lived in libraries, nose buried in a book.

At age 9 my grandfather died. It was the first death I ever remember experiencing and questioning. One day, grandpa was here, hiding quarters behind his back, and the next day, he was gone. A few days after his funeral I found myself sitting alone at my parent’s dining room table.

It was February. I was 9. And I was sad and confused. I sat there thinking about grandpa when suddenly, I want to write, popped into my head. The feeling that accompanied this thought was one of longing and determination. It gnawed at me until finally, I huffed in resignation and searched for a pen and some paper.

I don’t remember the words I wrote. (It was a poem). What I DO remember is the feeling of wonder as words poured forth, almost as by an unseen hand. I remember the release I felt as though water drained from my lungs and I could finally breathe through my pain. From that day to this, I’ve been hooked.